During the American Civil War, soldiers from Minnesota captured a Confederate battle flag. Minnesota is never, ever giving it back. 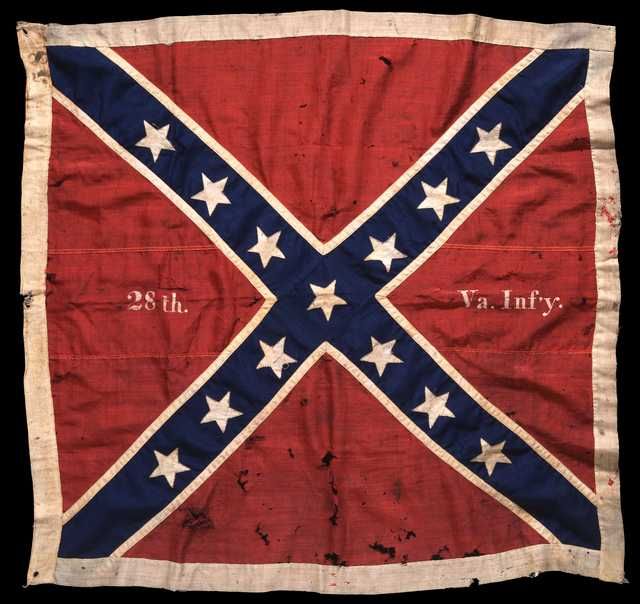 The American Civil War was a brutal, bloody conflict between the agrarian, slave-owning southern states and the industrialized north. Soldiers from every existing American state and territory took part in the years-long conflict, which would ultimately claim more than 600,000 lives. The war led to the total abolition of slavery in the United States, which was somewhat cold comfort to the millions of people whose entire lives had been spent in servitude.

One of the more famous (and one of the more fatal) battles of the war took place over the course of three days in Gettysburg, Pennsylvania. The members of the First Minnesota Volunteer Infantry Regiment had already suffered crippling losses - of the 262 original members, 215 were either killed or badly wounded on the first day. The remaining 47 weren't feeling particularly great about....well, anything. They'd been ordered to stop the Confederate Army's advance, and they'd been placed at one of the few points where the Union's lines were breached. For hours, the two sides held each other about 50 yards apart with gunfire.

Finally, a Minnesota soldier named Henry O'Brien had more or less had enough of the distance. Ignoring the angry cries of his commanding officer, O'Brien hoisted up the flag of the First Minnesota and charged face-first into the void. He would later reflect on the nuances of his decision-making paradigm, confessing that he had fully understood the order to stay put and simply didn't have any more f**ks to give.

The other Minnesotans, noticing that it was straight-up raining lead and perhaps afraid that their friend may have forgotten his umbrella, charged screaming into the fray after their flag. Among them was a young house-painter-turned-soldier named Marshall Sherman who, somehow, ended up running back out of the chaos holding a Confederate battle flag which until that moment had been the pride and joy of the 28th Virgina Regiment.

The captured battle flag was handed over to the office of the Secretary of War in Washington along with all of the other captured flags. After the end of the war, Congress ordered (eventually) that the captured flags be returned to their states of origin, partially because the attic was starting to stink with all of the rotting flags but mostly because the only Confederate flag they'd ever really cared about in the first place was the plain white one.

Most of the flags were returned as ordered, but inspection of the records revealed that the flag of the 28th Virginia was mysteriously absent from the collection. Funnily enough, it was no particular mystery to anyone living in Minnesota; the flag had hung in a St. Paul Cyclorama (basically a big room where people could go stare at a panoramic mural while they waited for television to be invented) for several years at that point. It wasn't hidden, either....literally anyone with a couple of pennies to spare could see it and hear the story of its abrupt change of ownership at Gettysburg.

The legal ownership of the battle flag has been a fairly contentious question over the years....unless you're the state of Minnesota, which seems pretty satisfied with its answer. Federal officials, dozens of groups from the state of Virginia (and, on at least five occasions, the actual state of Virginia) have demanded the return of the flag, citing heritage and a whole bunch of definitely-not-slavery-related reasons; each has been politely but firmly invited to pound sand. For over 150 years the state of Minnesota has kept one polite finger pointed cheerfully at the sky in a perpetual salute to the Confederacy, and the flag is unlikely to be traveling out of state anytime soon.