During World War II, a black soldier managed to slow down a German offensive by sacrificing himself in an absolutely legendary way. 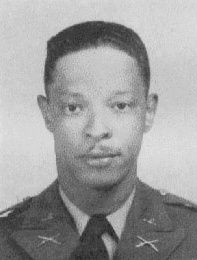 It's safe to say that World War II wasn't a pleasant experience for anyone (literally being a world war and all), but for black American soldiers the war was fought on two fronts at once.

To be a black man in the U.S. Army during WWII was, honestly, pretty similar to being a black man anywhere else in America at the time....it was a constant barrage of racism, being skipped over for promotions, being grouped into segregated units and given the worst assignments by default, and a host of other grievances which we're really good at telling ourselves are all behind us now.

In essence, to be a black soldier was to be less than a soldier, and deployed black units were treated just as badly in the field as they were back home. Black units (or Buffalo Soldiers, as they were called) routinely found themselves without reinforcements, without equipment, and even denied blood transfusions from their white counterparts. General Edmund Almond is reported to have said to his (black) junior officers in the 92nd Division, "I did not send for you. Your negro newspapers, negro politicians, and white friends have insisted on your seeing combat, and I shall see that you get combat and your share of casualties."

If their treatment of their comrades was brutal, their treatment at the hands of the enemy was far, far worse. We're talking about World War II, remember, so the enemy were already Nazis....under the best circumstances, Nazis are steaming piles of human excrement. Under the worst circumstances (like, when they'd successfully taken over most of a continent), their "master race" ideology led them to a very simple policy: only white enemy soldiers would be taken as prisoners. The others, viewed as sub-human, were simply executed.

On December 26th of 1944, First Lieutenant John R. Fox woke at 4 a.m. to the sound of heavy artillery and rushed to his position on a hilltop overlooking the village of Sommocolina, Italy. He sent an urgent message over the radio, noting that the streets below him were already teeming with Wermacht troops, with many more on the way. Within hours, it had become clear that there was going to be no stopping their push, but the Buffalo Soldiers stationed in the village were determined to slow it down by any means necessary.

Fox, an artillery spotter, called in smoke screens so that wounded-but-still-mobile Allied soldiers could get clear of the village. From there, he started calling in heavy artillery strikes, landing the shots perfectly to cause absolute chaos in the advancing tide. The combat turned into an ugly hand-to-hand game of cat and mouse as, little by little, the Wermacht picked off the defending soldiers.

Sensing imminent defeat and determined to buy more time for the retreating Allies, Fox kept calling in artillery strikes. Finally, completely surrounded and without any hope of escape, he called in one last one....on his own coordinates. Allied gunners on the other end of the call noted the position to him, and were met with what might have been the world's most badass last words:

A hundred Wermacht soldiers, having finally figured out who was calling in the shells that had been raining down on them all day, made a desperate charge on Fox's position, but it was long past too late....their orders in, the Allied gunners gave Fox exactly what he had asked for and lit the place up like the fourth of July. His body would be recovered later, surrounded by more than 100 dead Nazis and, presumably, with a big smile and both middle fingers all the way up.

The German advance was eventually fully repelled, and Allied supply lines remained secure, thanks to the extra time bought by Lieutenant Fox. He's commemorated on a stone in Sommocolina, along with the other Americans who fell in the battle. And in the United States, his name and story were in every newspaper, raised morale at a critical time, and his sacrifice is considered to be one of the most significant steps of that decade toward equal rights for non-whites in the United States.

....just kidding, the U.S. Army buried the story completely. Right along with the exploits of literally every black soldier, Lieutenant Fox's story was totally forgotten in the utterly white-washed American history of World War II. A huge number of black soldiers who were deserving of significant commendations were literally just skipped over entirely by a nation which wouldn't actually begin making any sort of progress on race relations for another twenty-five years, and even that was rocky at best.

Eventually, Fox's story was dug up by an American writer named Solace Wales....in Italy, where there was a memorial with his name on it. Curious, she connected with Fox's family and learned the bits and pieces of the story that they'd been told. She began a campaign to persuade an extremely reluctant U.S. government to recognize the sacrifice of Fox and others like him, which took more than twenty years to bear fruit. First Lieutenant John R. Fox was officially recognized and finally (posthumously) awarded the Medal Of Honor in 1997.